As we grow up, we come across all sorts of toys and gadgets. Some of them come and go, and some of them stay in our hearts forever.

Sylvanian Families toys are definitely in the latter category.

These diverse and darling animal characters have a long history and have been beloved by many – with the company behind the toys, Epoch Toys Ltd, claiming to have sold more than 100 million figurines in more than 50 countries since the 1980s.

Today, we want to tell you a little bit about Sylvanian Families – from how it all began to some of the design features of the toys, and anything else we can think of.

What are Sylvanian Families toys?

Sylvanian Families are animal figures and settings that are made of flocked plastic and depict the creatures and their homes of the fictional village of Sylvania.

Each of the characters or figurines is grouped into a family of like creatures. Originally, the animals featured in the series were woodland creatures, like hedgehogs, foxes, beavers, deer and rabbits. However, as time passed, the series introduced a wider variety of animals, like pandas, koalas, monkeys, elephants and penguins.

Dressed in a 1950s style of clothing, the animals of Sylvanian Families tend to depict a rural middle-class upbringing, and often own local businesses or have jobs that we see in our world each day – like doctors, teachers, bus drivers, and many others.

Sylvanian Families are anthropomorphic in every sense of the word. They have names, birthdates, and personalities. Their houses were curated just for them. A natural home for a figure holds succulent greenery, woods, a meadow, and a stream- manifesting the world of Sylvania.

With this brand comes three principles: nature, family, and love. They are timeless, appealing to both children and adults. May it be from little kids holding on to inanimate objects like friends, to adults who could reminisce memories at the sight of the nostalgic figures. Of course, there are also collectors who have unwavering support towards these popular figurines.

Sylvanian Families encourage children to use their imagination to create worlds, scenarios, and stories of their own. It helps them develop interpersonal skills and emotional intelligence innovatively. Sylvania serves as a world to explore the ins and outs of relationships and the qualities needed to harness good rapport with others.

So, now you know a little bit about what Sylvanian Families toys actually are, let’s see how they came about!

Back to when it all began

The word Sylvanian comes from the Roman god Silvanus and actually means “of the forest” – which helps to explain the types of animals that are featured in the sets – those of which may be found in the forest!

The release of Sylvanian Families was met with a very welcoming reception. While they were first released in Japan, it wasn’t long before they became available all over the world and were some of the most popular toys out there.

1987 also saw an animated tv series come to life. The Sylvanian Families TV series was particularly popular in the UK and Spain. The late 1990s saw a bit of a decline in their popularity in the UK, however, in Japan, they were celebrating 15 years of the Sylvanian Families, and did so by opening a restaurant!

While the toys did wane slightly in popularity, the early to mid 2000s saw their popularity start to rise again, and now, having just celebrated 35 years – it looks like the future is going to be very bright for the Sylvanian Families crew.

Alright, so if you’re thinking about getting into the collecting game of Sylvanian Families, here’s what you need to know! 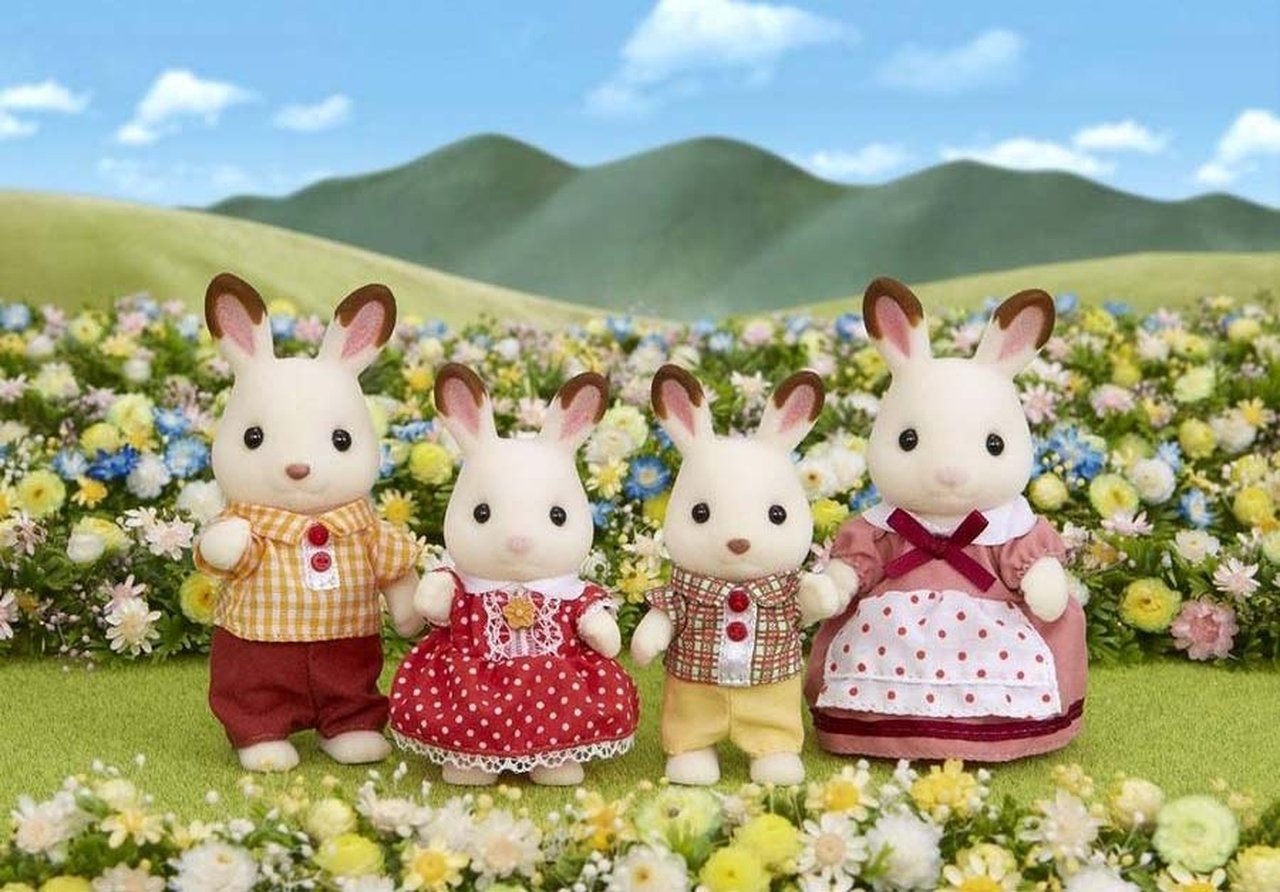 "Must knows” in collecting Sylvanian Families

It’s never too late to join in the fun of Sylvanian Families, so to help you get started, we’ve put together the answers to some of your burning Sylvanian questions.

Here’s what you need to know about Sylvanian Families to help get your collection started!

What does the 1985 sticker under the foot mean?

This sticker shows the date of copyright and that would be 1985 of the company Epoch Toys Ltd, which is the corporation to who materialized the concept of Sylvanian Families. Every toy you buy will have this sticker under the right foot of their foot. Even the newest releases will most likely have this sticker.

I noticed tiny holes – what are they for?

They are part of manufacturing the figure. Some might be more prominent than others, but all Sylvanian Families have them underfoot.

No one really knows why there are tiny pin holes but a common theory amongst collectors is that the hole is meant to keep the figure upright during the flocking process. The flocking process is when the figure is covered in a layer of soft fur. This 1985 sticker helps hide this tiny hole.

This theory is most likely to be true: figures that are standing have tiny holes under one foot while those that are sitting have holes on their bottoms!

What does it mean when a Sylvaniann Family is discontinued or retired?

Sylvanian Families launch new products in stores annually. Because there's a line of new items, the old ones naturally have to make way for them - hence the halt of production.

Once the previous collection stops being manufactured, they become hard to find and rare collectibles.

In Australia, we get Sylvanian Family new releases about a year or after its initial release overseas. If you want to know whether a Sylvanian Family is retired or discontinued, check their annual catalogue. As long as the model is there, it's still in production. If not, there’s a high chance that it’s discontinued.

What do the terms storage, age wear and shelf wear mean?

If you become a truly avid collector of Sylvanian Families, or any kind of toy, you’ll likely become familiar with specialist shops and also terms used to describe the features of the products and packaging – particularly if you’re chasing down retired or discontinued products.

Some of these rarer products, though new and sealed, their packaging may look worn down due to storage. This brings us to the different types of wear. Some of the terms you may become familiar with include:

●Shelf wear- characterised wearing of an item due to sitting on the shelf for a certain period. The outer packaging can have visible dents, scratches, and minor tearings from being handled.

●Storage wear- is due to long storage in various countries. The item may suffer from different climates and weather while in storage. Under these conditions, the package may show wearing, discolouring, and dents.

●Age wear- shows if the package has been stored for more than two decades. Tapes may appear discoloured and have torn edges, if removed, they're likely to leave a yellow spotting on the outer boxes. The packaging itself may experience fading prints, general wear, and even loss of the minor detail sticker.

How many different Sylvanian Families toys are there?

The Sylvanian Families range is huge! While we’re not sure on the exact number of all of the toys, one thing we do know is that since 1985, there have been more than 150 different families released!

So, no matter your favourite animal, it’s bound to have been immortalised by the Sylvanian Crew!

Over 35 Years of Playtime with Sylvanian Families

Sylvanian Families have been providing children and adults alike a magical world of creativity and pretend play. As the brand welcomes each new year with never-before-seen lines and collections, it continues to prove its timelessness and value in the toy industry.

We offer sets of both Families and buildings and vehicles so you can add to your growing families or village as you wish. And with Australia-wide shipping, competitive prices and a huge range of toys in addition to our range of Sylvanian Families toys, you can’t go past Toy Hunters for your toy needs!