LEGO has created one of the most diverse and universally appealing range of toys ever. No matter your age, your interests, or your skill level and experience, there is a LEGO set that is going to keep you entertained for hours.

Besides allowing you to use your imagination to explore and create, one of the ways LEGO keeps you entertained for hours is by creating large LEGO sets that require some dedicated time to build.

When it comes to large LEGO sets, how big are we talking? Well, today, we’re going to tell you about 7 of the biggest LEGO sets of all time. When we talk about big, we’re talking about big piece count – but hey, some of them are also quite big in size once full assembled (Titanic, we’re looking at you).

So, if you’ve always wondered just how many pieces of LEGO are in the biggest LEGO sets out there, keep reading, because we’re going to tell you!

We’re going to ease you into the 7 highest piece count LEGO sets, starting with the smallest piece count up to largest. So, get on your blocks, because we’re about to get started.

Starting with a lazy 5923 piece set, we have a set inspired by the real life landmark of the Taj Mahal in India. This set is part of the LEGO Creator Expert theme that has been designed for the experienced adult and adolescent builders who have some LEGO skills up their sleeves.

Originally released back in 2008, the Taj Mahal set was re-released in 2017 with an additional piece and better instructions, to make the estimated 25 hour build time a little easier for you.

The impressive model of the real life ivory and marble mausoleum will require some space in your home, standing at 43cm tall and 50cm wide once fully assembled.

This set has been retired by LEGO so if you want to give it a go, you might need to check out EBay or your LEGO building buddies to give this one a go. 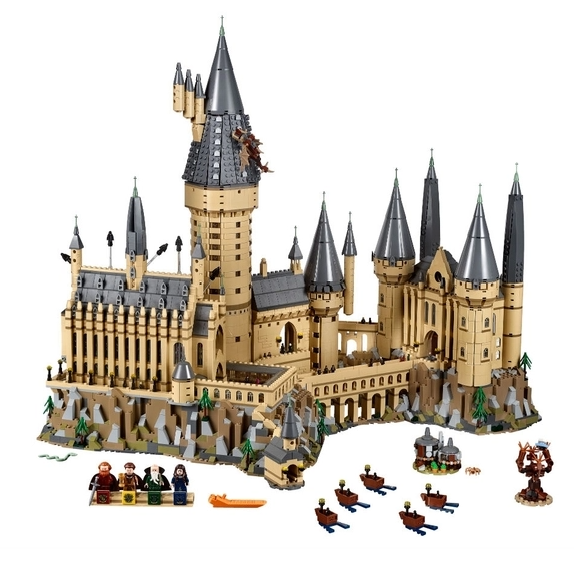 Coming in hot at number 6 is a set that is currently available to purchase right here at Toy Hunters – it’s the Hogwarts Castle from the beloved world of Harry Potter.

Designed to look like the Hogwarts that Harry first arrives at, this set includes such intricate detail that even when you’ve finally completed the build, you’re going to be marvelling at details for many years to come.

This set includes several minifigures and is a great way to either start your Harry Potter LEGO journey or complete it.

In addition to the amazing details, the set also features moveable staircases, the Great Hall, various classrooms and even Umbridge’s office.

Once complete, the castle stands at 58cm high and 69 cm wide, which while large, is amazingly small considering everything you can find in it.

Every HP fan needs their own LEGO Hogwarts castle.

For the ultimate LEGO Star Wars fan, this build and display model of the At-AT Walker features posable legs and head, rotating cannons, a bomb drop hatch, and space for 40 LEGO minifgures inside.

That’s right, this mighty set stands at 62cm tall and 69cm long, and once assembled, is ready for battle.

The build is challenging and is certainly designed for the extremely experienced builder or huge Star Wars fan that is ready for a challenge.

Compatible with other LEGO Star Wars set, you can build your collection even greater with the UCS AT-AT Walker today.

Upon its release in 2017, this 7000+ piece set was the largest LEGO set ever released at the time. And it also happens to be the most expensive. And while it might set you back a pretty penny, it’s totally worth it.

Capturing the most intricate details of the iconic star wars ship, this set measures at 84cm long, 21cm high, and 56cm wide upon completion and allows you to configure it to suit both modern and classic styles of the ship.

The interior and exterior are both extremely detailed, with the interior offering a number of different sections for you to relive your favourite Star Wars memories with.

You do need to set some time aside to build this one, with it estimated to take around 24 or so hours to complete. But perhaps you could combine your build time with a movie marathon and you’ll be set.

Rome wasn’t built in a day, and neither will be your LEGO Architecture Colosseum set.

This incredible replica of the real life landmark is the largest set in the LEGO Architecture theme, which takes its inspiration of real life architectural feats, celebrating the past, present and future of design.

Impressively, many of the real Roman Amphitheatres’ details are replicated in this set, such as the 80 ribs in the spectator stands, as well as various brick colours to mimic the real-life ageing process of the landmark.

Once complete, the set stands at 27cm high, 52cm wide, and 59cm deep and it actually follows the real life building process in the instructions.

If you’ve always wanted to celebrate the longstanding history of Rome, then this set is for you.

Not only is this set high in piece count, but also in size – being LEGO’s longest physically, measuring at 135cm once complete.

Your heart will go on as you build this set that also features details from the original ship, like the swimming pool, ships’ bridge, grand staircase and boiler room.

Whether you’re a history fan or a Leo fan, it doesn’t matter, because this ship is going to keep you entertained for hours.

Just keep in mind, the LEGO version was not made to float, it’s best on dry land.

The largest LEGO set is a bit of a different pace compared to the other sets mentioned on this list. That’s because this set can double as not only as a LEGO build, but a piece of art for your walls and even a way for you to keep track of your own travels.

The flexibility of this set allows you to choose which continent will be front and centre on your version of the map, and you can also experiment with various colours to create the oceans and land to look however you like.

With a soundtrack also included, you can feel like you’re travelling the world through LEGO and music as you build you new creation.

This completely unique LEGO set will have you and everyone who sees it endlessly entertained.

Buy your next LEGO set today

As you can see, even in this short list of the largest LEGO sets out there, there is so much variety on offer. So, why not be a part of it?

If you want to get your hands on a new LEGO set in Australia, check out our range here at Toy Hunters. We have a huge collection of the most amazing sets available now, at great prices.

We ship Australia-wide from Sydney, and with flexible payment options, like AfterPay and ZipPay, it couldn’t be easier to get your hands on your next LEGO set than it is with Toy Hunters.